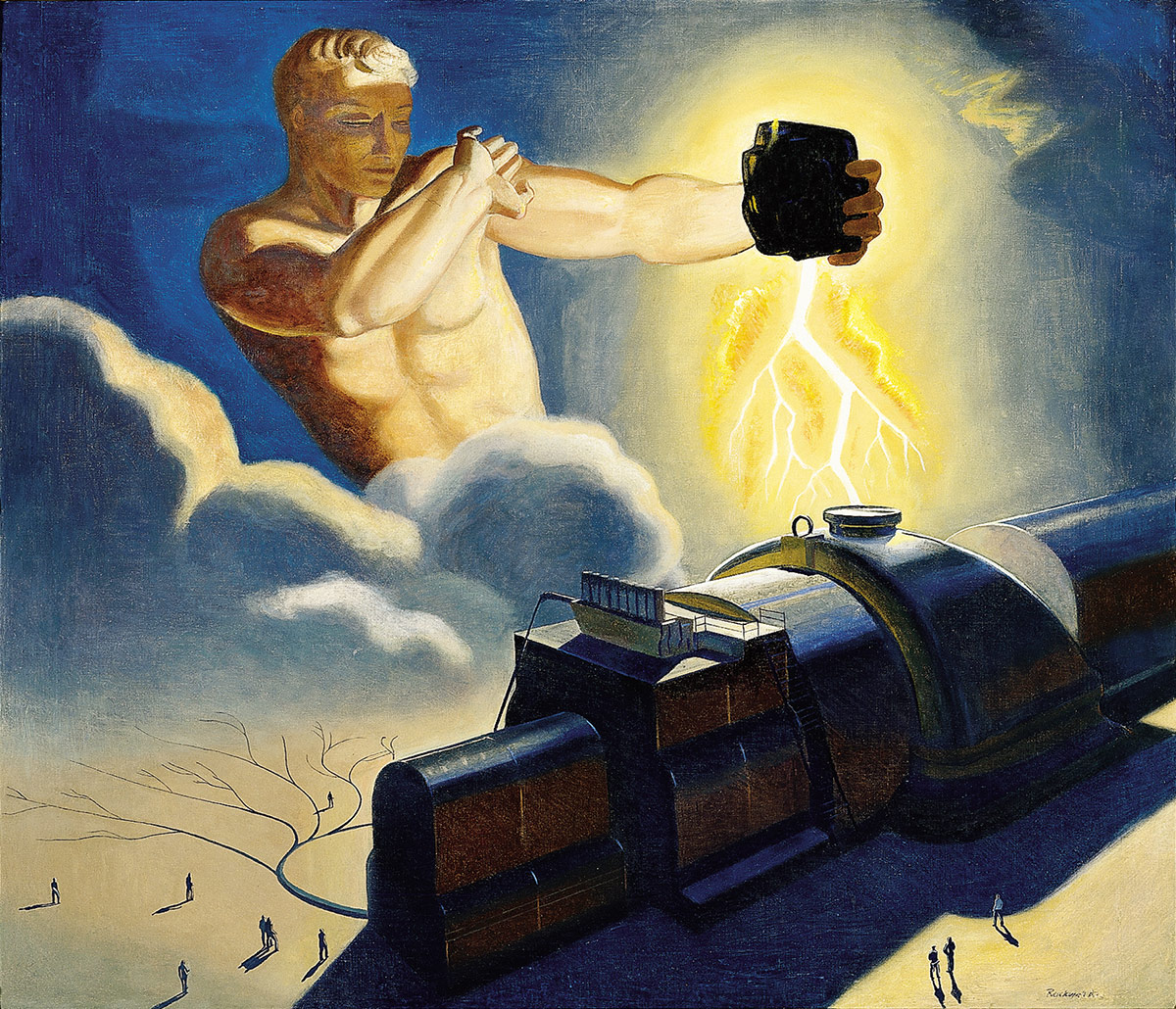 Emerging from a cloudburst and shielding his eyes from an explosive ray of light, man’s vital role in the transformation of coal into energy is depicted in Rockwell Kent’s Endless Energy for Limitless Living. This is one of nine paintings in a series commissioned in 1945 by the Bituminous Coal Institute and the Benton and Bowles Advertising Agency. Featured in advertisements in the Saturday Evening Post, Newsweek, and Liberty, the purpose of this image was two-fold. First, it was intended to strengthen the reputation of the coal industry. Second, it was designed to secure coal as the principal energy source in a modern, postwar society.

More about the work & artist:

In the upper left portion of this painting is the nude torso of a muscular young man, gigantic in scale compared to the other elements in the picture. Standing against a twilight blue background, his upper body emerges from a group of bluish white clouds at the left center. The man’s hair is blond, and his flesh has a golden tone. His left arm is held straight out from his body and in his hand is a large lump of black coal. Jagged bolts of lightning burst from the bottom of the coal; the man shields his face from its bright glow with his right forearm. Directly beneath the lightning bolts is a coal generator shaped to resemble a locomotive. Illuminated by the glowing coal, the generator casts a distinct shadow on the ground. Standing on both sides of the generator are tiny human figures, also casting long shadows. Issuing from the generator is one thick curving line which immediately branches into several thinner lines; these in turn fork into even thinner lines, resembling a network of veins receding into the distance.

Such a unique composition and subject matter actually is part of a series that Rockwell Kent executed in 1945. The nine paintings were commissioned by the Bituminous Coal Institute and the Benton and Bowles Advertising Agency in New York City as illustrations for an advertising campaign that ran in magazines such as Saturday Evening Post, Newsweek, and Liberty. The purpose of these spots was to boost the reputation of the coal industry and argue for the centrality of this energy source for the modern, postwar society. Other works in the series included Power for the Wheels of Progress, Heat for the Steel That Shapes Our Lives, To Make Dream Homes Come True, and Light for Tomorrow’s Lincolns. Their titles suggest society’s perceived total reliance on coal. Likewise, other utilities and heavy-manufacturing industries, such as steel, copper, and natural gas, competed in the public arena of advertising for public loyalty and recognition.

What is the most intriguing aspect of this series of works is Rockwell Kent’s own political history with relation to coal and the plight of union workers. Known throughout the 1930s as a political leftist, Kent was actually a major spokesperson for the Communist Party in America. Answering his own rhetorical question of “what is an American” in The New Masses in 1936, Kent states that “to be a true American a man must have the will to right our social wrongs. How, is his own concern. For me, the way is Communism.” Also, in 1936, Kent, in making the claim for the unionization of artists, draws upon the example of the United Mine Workers with the following caveat: “Coal is to be sure a first necessity. Yet it is hardly realized what a necessity art is . . . Not only are the workers in coal organized, but the workers in diamonds. Are diamonds a greater necessity to man than art?” Finally, in 1935-1936, Kent aided the striking marble workers in Rutland, Vermont. Against such a backdrop, then we might wonder of the place of this 1945 work that seemingly celebrates the power of industry over the common people, the workers. The question remains, was Kent caught up in the optimism of the postwar victory and promise of a bright future?